One of the best, if not the best, gaming mouse in the Rival series.

If I had to choose one reason for why I consider SteelSeries one of the top peripheral manufacturers on the market, it would be that they’re always trying to push the boundary further. They did that with their headsets, and they did the same with the Rival series.

One of the alumni of this series is the Rival 600, a strong mouse that performs in (nearly) all departments. Here’s our SteelSeries Rival 600 review, where we’ll go over its features, capabilities and other perks that recommend this mouse.

*This item was not provided by SteelSeries. It was purchased by Unleash The Gamer for review purposes only.

Out of all the mice from the Rival series released up until that point, the 600 is undoubtedly the most comfortable to use. While it lacks the two-tone aesthetic present on earlier mice, it features more soft-touch finishes spread throughout the body of the mouse.

Furthermore, the lateral parts are lined with soft pieces of rubber, ensuring a stable, firm and comfortable grip. On the other hand, palm-grippers will have some trouble reaching the front-most thumb button due to its awkward placement. On the bright side, the side buttons are easily accessible regardless of your type of grip. All in all, despite some hitches, it’s a comfortable mouse that accomodates a wide range of preferences and personal tastes. 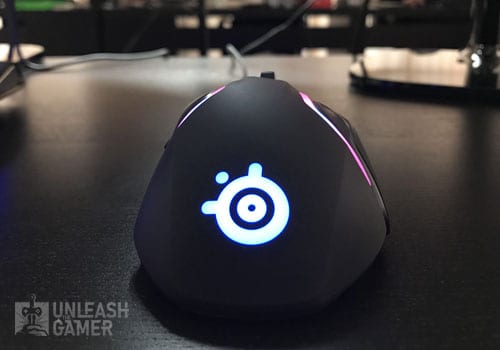 At first glance, the Rival 600 resembles its much older brother, the Rival 310. But like any younger sibling who overcompensates, the Rival 600 is much bigger and bombastic though, thankfully, it’s not as bulky as the middle sibling, the Rival 500.

Clever familial anecdotes aside, the Rival 600 is quite aesthetically pleasing. It’s very stylish, with two RGB LED strips snaking down the mouse’s center, and a graceful, elegant angular build.

It features a cleaner look than the Rival 500, with (way) fewer buttons than its predecessor – more precisely, three side buttons, as opposed to a whopping 15 buttons and switches. The layout is more focused and streamlined, having no more, and no less than you would need to game competitively. 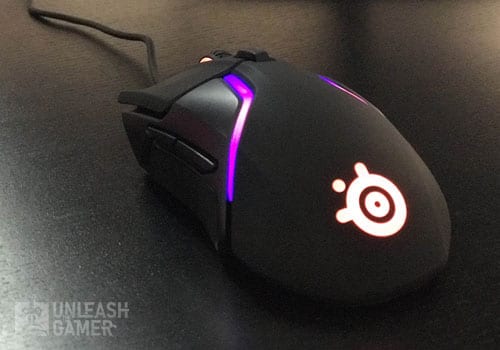 The feature that’s been marketed the most is its automatic calibration. In lay talk, it’s essentially a system that will automatically calibrate its liftoff distance in accordance with the surface it’s sitting on.

More specifically, it’s supposed to keep your aim straight even if you’re the twitchy type of gamer that lifts the mouse a lot. And you know what? I’m that type, and I found this feature to be an absolute god-send.

In this regard, I concluded that the Rival 600 is as compact as the Sensei 310, with the notable difference that it doesn’t favour people with larger hands. It’s sleek, and it fits perfectly within any setup. 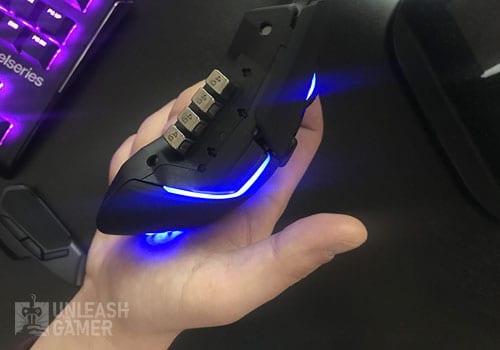 Now comes the best part about this mouse, more specifically, the adjustable weights. Both sides of the Rival 600 is magnetized, meaning you can easily detach them just by flipping the mouse over and picking the weights one by one until you reach the ideal weight.

This clever system keeps the weights firmly in place even during the more intense gaming sessions. There are eight of them, each weighing roughly four grams.

So, do the adjustable weights make the Rival 600 a multi-purpose, multi-gaming-genre mouse? Frankly, this comes down to personal preference. While I personally believe this is one of the best multi-purpose mice, the shape and the design philosophy might make some people argue that it’s better suited for strategy games.

I think the truth is somewhere in the middle. Yes, the level of accuracy will come in handy in competitive shooters, and yes, the balanced physical proportions encourage competitive RTS gaming. But I can’t say, after some extensive tests, that it excels in one department or another.

The SteelSeries Rival 600 offers some of the slickest and most diverse customizations options currently on the market. The first thing that I want to mention is the detachable chord. Personally, I don’t know why only a handful of mice have this option – maybe because it would render wireless mice useless? Who knows, really.

Since it’s 2019 and more people game on the go than ever, all mice should feature a detachable cord, for practical reasons more than anything else. I’ve lost count of the mice chords I’ve destroyed during my travels, so the Rival 600’s detachable wire is a welcomed feature. It isn’t braided but, you know, you can’t have everything.

As for the customization options, the Rival 600 offers the usual stuff, like button programming and illumination, which can be fiddled with via the SteelSeries Engine 3 Software. The software itself is very clean and intuitive, allowing users to reprogram and repurpose any of the mouse’s buttons, and make the mouse light up like a Christmas tree.

Featuring six different lighting zones, users can make up their own lighting patterns. Be advised that the software selects only one zone by default, so you’ll have to manually configure the other zones.

The profile and button functionalities are pretty straightforward and easy to configure. One thing to consider here is that the Rival 600 allows only two DPI settings per profile. Not a big deal, because you’ll rarely need more than two DPI settings for most games. While this keeps things clean and simple, you’ll need to set up individual profiles for multiple games. Certainly not a deal-breaker, just something to ponder.

The noise is barely noticeable, even in a sound-proof room – ok, this last part I just assumed, I didn’t actually test it in such a room. If there was one thing I’d complain about, is the fact that the right-click button is a bit noisier than it should. However, this is just a nitpick, and since I usually play videogames with headphones one like (I assume) everybody else, I got over it.

This concludes my SteelSeries Rival 600 review. It’s not the option to buy, but it’s two or three features away from being the best gaming mouse on the market. It looks good, it feels good and offers tons of customization options for all tastes and preferences. If you’re looking for a genre-specific gaming mouse, you may want to look somewhere else. But if you want a balanced, multi-purpose mouse that satisfies on all levels, few options are better than the SteelSeries Rival 600. 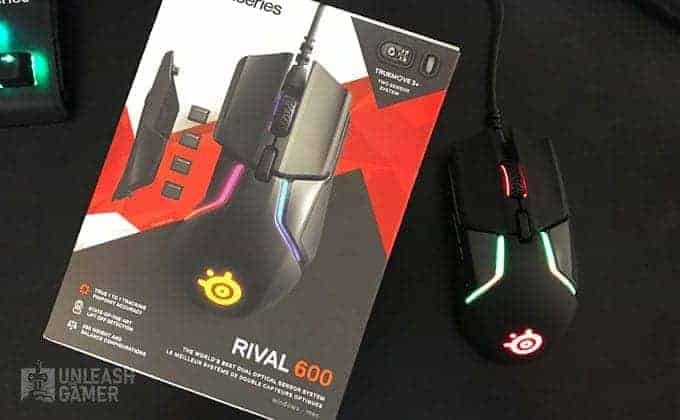