It’s the epitome of “what you see is what you get” in the best possible way. It’s sleek, sturdy, and, most notably, compact.

There’s an old mantra circulating amongst gamers: ‘’if it ain’t mechanical, I don’t wanna see it’’. I, too, was guilty of this, up until I laid my hands on the Razer Cynosa Chroma. It’s a keyboard that is aimed at the budget consumer who wants quality and performance but without breaking the bank. Don’t believe us? Let’s kick-start our Razer Cynosa Chroma review and see what this keyboard is about.

*This item was not provided by Razer. It was purchased by Unleash The Gamer for review purposes only.

Being a Razer keyboard, the Cynosa Chroma is slightly different from other membrane keyboards. In case you’re unfamiliar with the differences between membrane and mechanical keyboards, the former usually have a single sheet of rubber domes inside the keys, while the latter have individual switches underneath the keys. This is why membrane keyboards feel spongy and awkward when typing at speed or mashing multiple keys at once, and mechanical keyboards give a more physical, responsive feedback.

Weirdly enough, the Cynosa Chroma is between these two worlds. Razer describes the keys as being ‘’soft-cushioned’’, meaning that they’re less spongy than other membrane keyboards. This is fine for gaming, but the Cynosa becomes quite uncomfortable to use after, say, half an hour of typing not only due to the cushioning but also due to the keys are taller than on your average keyboard. In other words, the Razer Cynosa is comfortable for gaming, but if you need to type more than your odd Facebook message, you should look somewhere else. 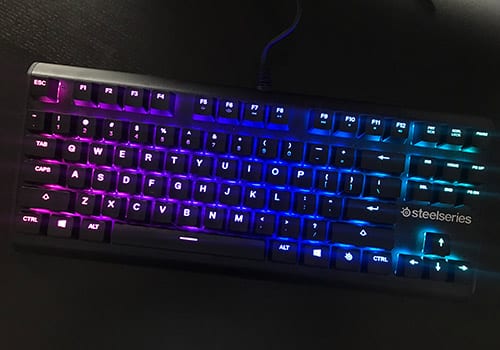 The modern RGB aesthetic feels right at home here, as the Razer Cynosa Chroma is built with RGB enthusiasts in mind. With the right settings and color combinations, you can light your desk up like the Mardi Gras. This is possible thanks to Razer’s, as usual, flawless implementation of RGB options – but let’s leave that for later in the review. 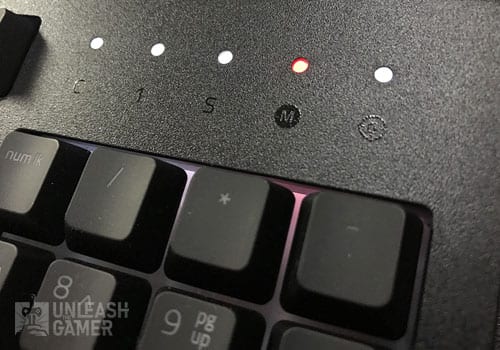 As for the design of the keyboard itself, it doesn’t really have that ”gamer look” (whatever that means), and that’s OK, if I’m perfectly honest. The Cynosa Chroma features a simple, minimalistic design, with its main highlights being the subdued black coloration and lack of on-the-nose logos and branding elements.

If I were to pinpoint its design in a few words, I would say it looks like a blend between a modern gaming keyboard and an old-school Model M keyboard – you know, the ones you would see an account filing the quarterly taxes on. You can easily see yourself packing this keyboard and bringing it to the office. Imagine doing the same thing with the Razer Elite Huntsman – boy, would I love to see everybody’s look.

When it comes to compactness, there’s nothing to write home about. It isn’t bigger nor smaller than your average keyboard, so you won’t be forced to make adjustments to your workspace or anything like that. It was designed to take as less space as possible, and with the lack of ”extras” (which could be both an advantage and disadvantage) only reinforces its compactness. 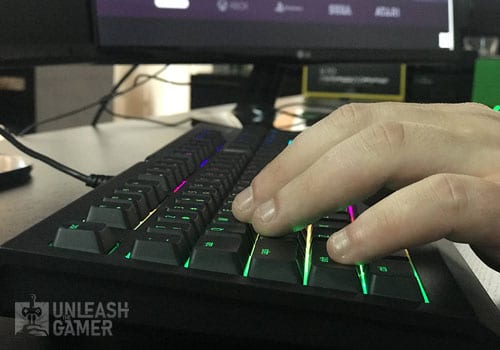 The Razer Cynosa Chroma is extremely durable. In fact, it’s specifically designed to be damage and spill resistant – but please don’t test our assessment at home, respect your hardware. Owing to my, let’s say, twitchy style of gaming, I’ve always had that issue where the keyboard would end up at the edge of the desk at the end of my gaming session. For this reason, I’m happy to report that the Razer Cynosa Chroma stays firmly in place. Gone are the days of constantly repositioning my keyboard while under heavy sniper fire from the other side of the map.

The Razer Cynosa chroma boasts a decent amount of customization options. This is possible thanks to Razer’s fantastic Synapse software. By using their dedicated tool, users can customize the lighting whichever way they desire, and if you have multiple Razer products, you can sync them up. There are 104 individual backlit keys that you can play around, so if you’re a true RGB enthusiast, let’s just say you’ll have a field day with the Razer Cynosa Chroma.

The one thing I found slightly inconvenient is the lack of extra macro keys or media controls. This isn’t necessarily a deal-breaker, but considering the asking price, it shouldn’t come as any surprise that Razer chose not to include these features.

The aforementioned soft-cushion technology makes it so that the Razer Cynosa is one of the quietest keyboards I laid my hands on. This can come both as an advantage and disadvantage – after all, all keyboard manufacturers know that the satisfying ‘’clack clack’’ sound is a big selling point, so they push this as much as humanly possible. Don’t get us wrong, there’s still some noise to put up with, but not so much so that you’ll disturb anybody.

This concludes our Razer Cynosa Chroma review. Minimalistic in every sense of the word, this keyboard is sturdy, reliable and will serve you faithfully through many a gaming sessions. Though the lack of macros and media keys may be a little disconcerting to certain people, the quality on the table and the numerous features will give you a lot of bang for the buck. 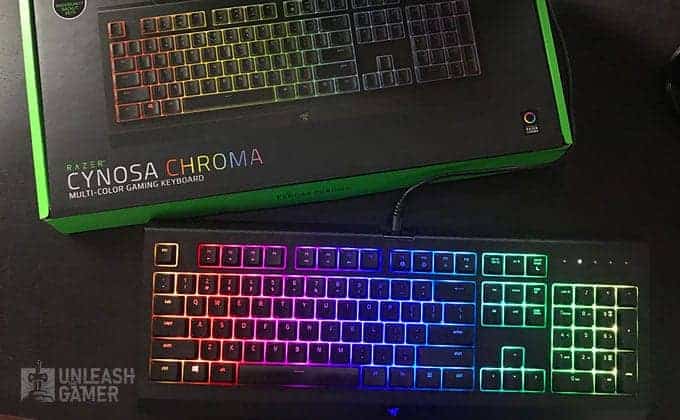