After years of development and weekly dev blogs, fans have something concrete to look forward to. Talewords will show a PVP demo and a single player beta of Mount and Blade II: Bannerlord at Gamescon 2019.

While lesser men have turned their virtual swords into upgraded gold watering cans and gone home to Stardew Valley to tend their crops, we loyal Calradians have remained faithfully gathered under our liege lord’s banner. In the real world, there are plenty of examples of sieges lasting for years or even decades, and for nigh on seven winters now our Warband has been encamped in front of Taleworld’s castle waiting for a sign that Mount and Blade II Bannerlord hasn’t turned into vaporware. Hopefully, this won’t turn into a reenactment of the Hundred Years War.

Leave the farming to your peasants. Become a Bannerlord. 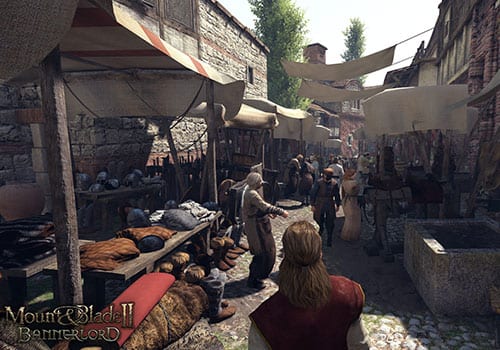 Thankfully, it seems our patience is about to be rewarded: Taleworlds has announced that a playable demo version of Mount and Blade II Bannerlord will be made available to the public at Gamescom 2019 in Cologne, Germany. The demo will focus mainly on multiplayer PVP combat, but Taleworlds will also demonstrate portions of the single-player campaign before a live audience.

Taleworlds Entertainment’s sandbox RPG Mount and Blade series is famous in the PC gaming community for its challenging (and often insanely frustrating) medieval combat and deep strategy elements. Despite graphical limitations and control issues, the total freedom to choose your actions and -more importantly- live with their consequences in Mount and Blade: Warband created a level of immersion that many big-budget AAA titles struggle to achieve. Hopefully the upcoming Mount and Blade II Bannerlord has smoothed out some of the rough patches while still providing the incredibly immersive environment that made its predecessor worth coming back to, time and time again.

Medieval Sandbox in the Truest Sense of the Word 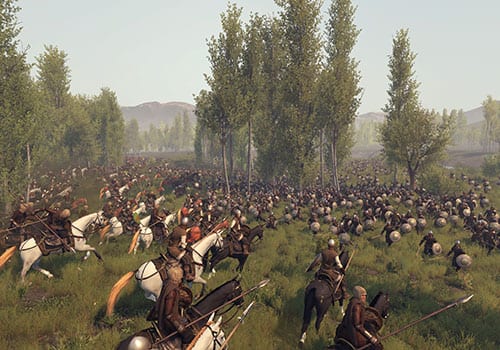 Unlike other developers, when Taleworlds says sandbox, they really mean it– they won’t hover over you like a helicopter parent making sure everything goes your way, no, they believe in old-school parenting. Whether you end up building an awesome sandcastle or digging up old cat turds, the decision is entirely yours. And if you choose to stand up to the playground bully, you’d better get used to having sand kicked in your face. There’s no plot armor that will save your favorite companion from permadeath if they fall in battle, and if the difficulty stays true to previous titles, after a hard-won battle you will agonize over whether to accept their death and move on, or save-scum and try again.

In fact, play MBIIB long enough and your main character will experience permadeath as well. In a Q&A session on Taleworld’s site, programmer Rabia Adıgüzel quite enthusiastically informs us that “Yes! In Bannerlord, the player can die because of old age. At first, the player gets sick. Then the player’s hitpoints start to reduce daily. After a certain time, death occurs.”

Your game won’t end there, however, as she goes on to point out that “During the decline of their health, the player can arrange his/her final wishes then, when the death occurs, the player selects an heir from one of his/her clan members that are suitable and mature. Then, the cycle continues. This process also applies by AI lords too.” 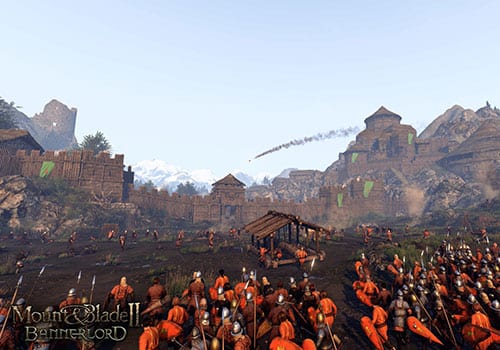 In previous titles, the roleplaying element could feel a little thin. The quests were repetitive and many of the NPCs felt bland and forgettable. In Warband I would often forget which lord lived at which castle and what they needed from me to complete a quest. The “sameyness” of every lord having a fetch quest, a faction quest line, a daughter to marry, etc. could get a little boring.

Writer and game designer Steve Negan addressed this concern last year in a blog post on Taleworld’s site. “In Warband, we concentrated a lot of the elements of a traditional role-playing game into the companion system… In Bannerlord, we’ve spread the role-playing elements around more evenly…To that end, we’ve taken out some of the pre-scripted companion interactions in favor of a more dynamic system. Also, more lords have backstories and those backstories matter more in how the game unfolds.”

If it’s true that they’ve updated the character interactions and added more depth to the NPCs, then Mount and Blade II Bannerlord just might claim the throne as the best RPG of 2019, or 2020, or whenever it releases. The long wait is all part of the immersion. There’s nothing more realistic than spending seven years staring at your enemy’s castle, dreaming of the day when you finally rush through the gates and put them all to the sword. Or hold a feast and marry their heir. Or force them into a trade deal. Or pillage their treasury. Or… well, you get it. The choice is yours.