The Logitech G900 Chaos Spectrum is the best mouse that money can buy right now.

Logitech has long established itself as a leading brand in the gaming peripheral market, and the G900 Chaos Spectrum is a clear example of the attention to quality and detail that makes them so successful.

I’m not much of an unboxing video fan, but the packaging for this mouse is stellar, and an example of how to set expectations about the product through good packaging design. This way you know from the get-go that you’re in for a treat.

What we played: CS: GO, Bioshock Infinite, The Witcher 3

This mouse is nicely weighted and ergonomic, while maintaining a good size that finds a nice middle ground that lends itself to comfortable use by people with varying hand sizes. Easy to grip, and flexible in its button layout, it’s a mouse that has been lovingly designed with versatility in mind. In fact, this will become a recurring theme throughout this review, as it is clearly the design philosophy Logitech had in mind for this one, from the interchangeable magnetic buttons to the symmetrical, ambidextrous shape. 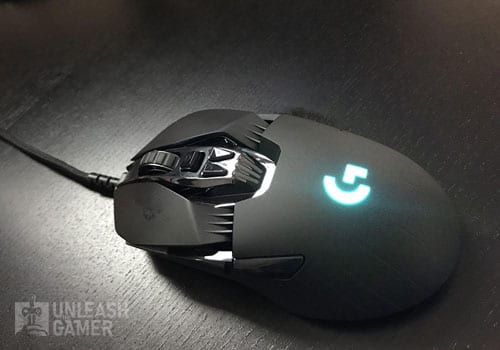 Speaking of design, the Logitech G900 Chaos Spectrum looks and feels incredible, the plastic has a nice black and grey matte finish and the metal parts are polished and sleek, perfectly complementing the modern, almost sci-fi esthetic of its frame. It’s made with ease of use in mind, featuring an angular, symmetrical body that is simple and elegant without looking too sparse. 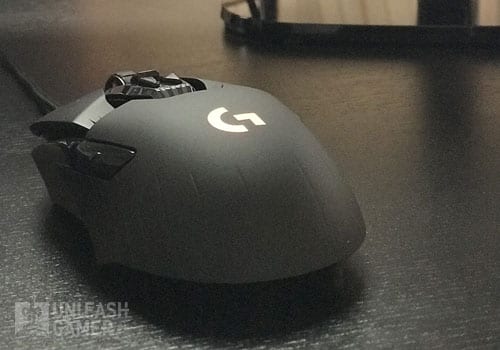 It has a maximum of 11 buttons, depending on how you customize their layout, and the lighting is subtle and stays almost completely out of the way, which, if you’re like me, and prefer the RGB effects to not be too flashy and in your face, is perfect. At the end of the day, you’re rarely going to be looking down at your mouse during intense gameplay sessions anyway.

It boasts the flagship optical sensor PMW3366 that features exceptional accuracy and surface tuning, and a 1 millisecond report rate, which works well in both wired and wireless mode. I haven’t been able to tell the difference between the two, however while I am an avid gamer, I am not a pro by any stretch of the imagination, so take that with a grain of salt.

The Logitech G900 Chaos Spectrum is a medium size and while that might seem like a bad thing for people with large hands, from the tests we’ve performed around the office, this will not pose an issue. 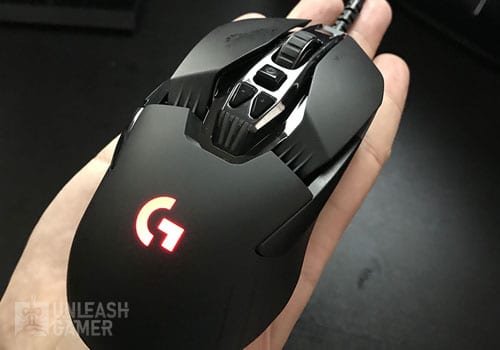 The Logitech G900 Chaos Spectrum weighs only 107g, favoring a hollowed, sleek frame that makes it easy to use over long periods of time. However, every part of the mouse is built out of high quality materials, and overcomes the classic trope that a mouse without heft has to feel cheap.

Customizing this mouse is an absolute joy. The detachable side buttons click back on their magnetic slots with a very satisfying click, and in a rush, it can be done within seconds. The scroll wheel is another pleasant surprise, at it features two modes, the standard scrolling, and inertial, which releases the wheel stoppers to allow you to scroll infinitely all the way to the end of the universe, as one small flick makes it spin (for what feels like) forever. Once you get used to how sensitive the scrolling becomes in this inertial mode, you’ll wonder how you lived without it.

As mentioned above, the mouse can be used in both wired, and wireless mode, and the cable has built-in safety hooks to prevent you from unplugging it by accident during hectic play sessions.

Oh, and you can also switch between wired and wireless on the fly, should the need arise, with 0 interruptions in gameplay.

It also has an insane DPI range of 200 to 12000, so it will easily lend itself to use in virtually any game genre, from the more slow and deliberate turn-based games like Mutant Year Zero or Banner Saga, to the hectic split-second action of competitive shooters like CS:GO or Overwatch, and everything in between.

The software allows for a good amount of customization of lights and buttons, including macros of course, but to me the real star of the show is the surface tuning, that helps you use it on a variety of surfaces without sacrificing accuracy.

While the weight felt good to me, it could be a notable minus that it does not feature customizable, removable weights like other mice in this price range.

Every single moving part of this mouse is damn near ninja silent, with one jarring exception. The scroll wheel in standard scrolling mode, which to me in a quiet room sounded like a walrus giving birth to farming equipment. However, this is not a deal breaker by any stretch, as you’ll be using the inertial scrolling 9 times out of 10 anyway.

A high-end experience, to be sure, this mouse has almost everything you could ever ask for, missing only the customizable weights, everything else about it is clearly designed with the user experience in mind, allowing for a wide range of button, lighting, DPI, and macro permutations. If you want a mouse that does everything right, and lets you build your own ideal setup, then look no further. 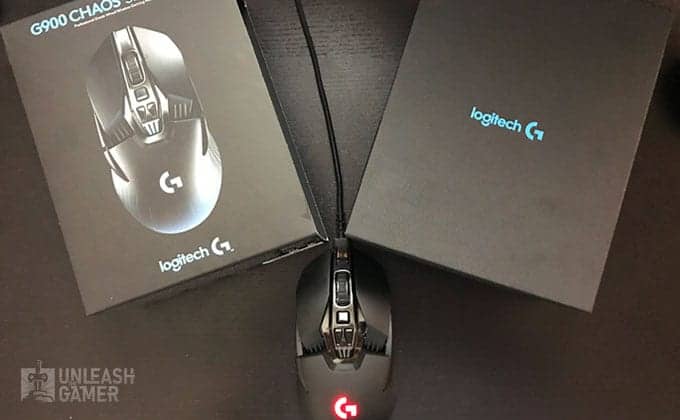