Style and comfort are at home when it comes to Logitech G Pro.

Picture this, all alone on dust_2. You need to clutch. Multiple pathways and multiple problems coming straight at you. Directional audio, precise awareness, Windows Sonic and Dolby Atmos are there with you. It’s now a 5v5. If you can’t win this then maybe you need to up your reflexes and your auditory capabilities.

Ok, in all honesty, in this situation you need to be KennyS. But, and hear me out here, KennyS also uses the Logitech G Pro. Coincidence? I think not. Frankly, you won’t get near Kenny’s level any time soon with just the headphones but if you have the skill and the determination, you’ll see a noticeable change in the way you play.

Style and comfort, Logitech’s got you. You have microsuede and leatherette earpads at your disposal. Imagine suede and leather but vegan. Both sets of pads are made of faux leather. It’s really a drag if you’re trying to actively stop using plastic and being vegan at the same time but I digress.

Comfort-wise I prefer the leatherette ones just based on how they feel against my head. The foam and outer layer are soft enough that I had them for 8 hours straight, on top of my trusty bifocals, and I didn’t feel at all bothered by them.

Gaming during summertime without AC can get really sweaty around the ears especially if one becomes agitated, yells or gesticulates at the screen. But I’m no fool, my AC is on during every session. I can only assume that even if you’re calm, but your AC is off you’ll get some slight sweat.

Now my ears are small, and they fit perfectly, with room to spare, inside the ear pad granting me that pleasant degree of passive sound isolation. It’s not that I didn’t hear what was happening around me, it was all a tad subdued. 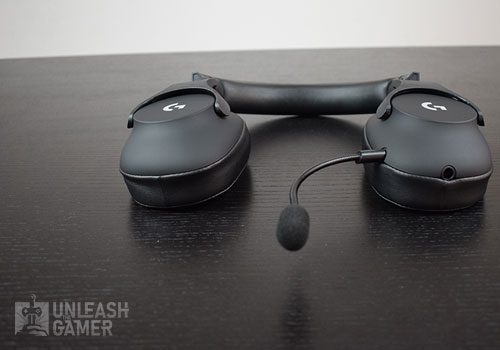 Everything is either glossy or matte black except for the “Pro” and “G” logotypes which are in a sort of a silver-ish white. They stand out, but it’s tasteful. Everything from top to bottom is black.

It’s the Logitech mantra, make it matte black and make it look like a radar can’t pick it up when it’s flying.

Shape-wise these are not out of the ordinary. Grab your nearest Pictionary and search for headset. You’ll see that the silhouette present is exactly the one of the Logitech G Pro. No extra wires, no quirky placement of screws. 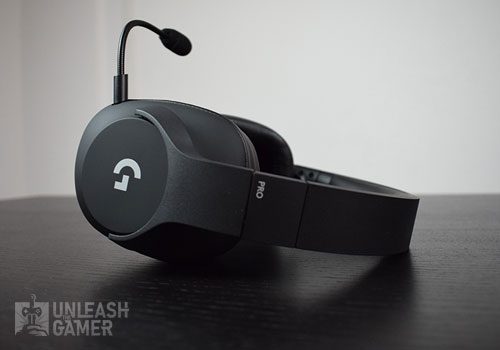 An unusual entry here is the microphone, bendy and noise filtering. Also removable by the way, I could have worn them during my daily commute, as a worst-case scenario. My teammates could have sworn I bought a studio microphone just for Overwatch.

Sorry friends, it’s just the built-in one which is advertised and behaves like a pro-grade mic. There’s quality, richness and texture to your in-game voice. Leeroy Jenkins has never sounded better.

Logitech’s Hybrid-mesh Pro-G audio drivers are here to aid in case (if any) of distortion, delivering countless hours of spatially accurate audio. For the price range they’re in, sub $100, they’re making a great level of sound quality accessible to all rankings of gamerkind. Hell, entry level gamers that are looking for a mildly priced equipment bump, the Logitech G Pro are my honest recommendation (don’t forget KennyS has them). 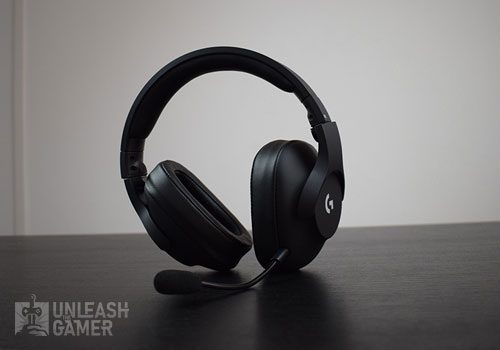 And I say worst-case scenario because while the headset’s on par (or above) while gaming, when it comes to watching YouTube or listening to tracks on Soundcloud or Spotify, the spectrum of sounds just isn’t there.

I’m no purebred audiophile but some genres require a kicking, clear bass and crispy highs, all at the same time. I won’t go into the specifics of my playlist but there’s a noticeable difference between these and my daily drivers. Don’t get me wrong, the Logitech G Pros deliver a sound that is more than enough. Bearing in mind that this product is destined for gamers I won’t subtract any points.

Build wise they have been stripped down to the bare essentials. Plastic all around this baby as far as I can tell. Polymers, nylon and glass fiber. The adjusting mechanism (slider) and the ear cup pivots are stainless steel.

The scale said 259 grams. Of course. The Logitech Pro G is stealthy, as in black, and stealthy as in light. The overall degree of comfort was up from the get-go but only after looking over the official specs list I understood why. They’re kinda floating there, lightly grabbing my skull, not being bothersome even after a bunch of hours and a whole lot of moving around.

For a headset made from plastic polymers it’s not flimsy, dare I say it even tips the scale towards the robust side of things, but they will crack if you dare to sit on them.

All controls are found in a little dongle that sits quietly on the braided cable. There is a microphone switch, which will mute or unmute, on one side and a clip on the opposite side for latching it on to your clothes for improved stability when voice chatting with your teammates. Between them, on the side, there’s a volume wheel. This tiny controlling ensemble is colored in Logi’s proprietary matte black, bearing it’s stylized “G” in glossy black. Minimalism is at home – zero buttons on the headset.

One thing that you’ll have to learn after buying the Logitech Pro G headset is cable management. At least I did. The cable is plentiful, sitting at 2 meters of braided polyester cable, this baby will get tangled with itself and other things around you if you’re not paying attention. On the other side it’s durable and won’t be obliterated when you run over it with your chair.

For a few months now my right hand rests on the Logitech G402 and since then I’ve admired it’s capabilities of being trustworthy and good looking. It’s both nice to look at and feels great in my palm.
Since then I’ve added one of it’s Logi-cousins to my desk. Not only they complement each other nicely, they are also working their butt off in order to make my gaming comfortable and accurate (and they’re both matte black). 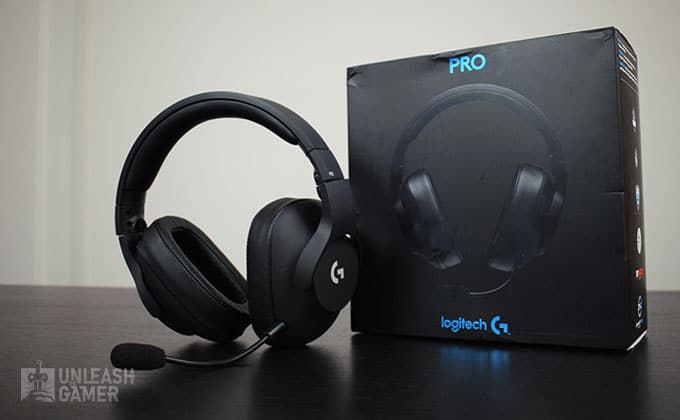 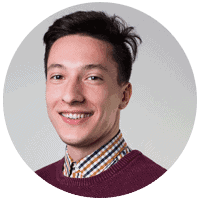 My first gaming experience was on the NES with Super Mario Bros. Safe to say, I never really got to Princess Peach on my own. My dad was the head honcho. Quick fingers gamer guy. He would usually help me get past the difficult parts then let me finish the level. Jumping on the flagpole was another one of the things I couldn’t really do. Getting only 200 points was my special ability.